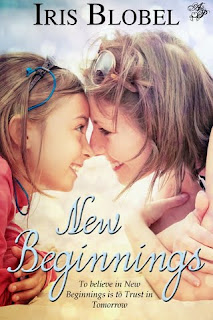 
Blurb:
Twenty-two-year-old Sophie Levesque has been guardian to eight-year-old sister Mia since their mother’s death a few years ago. Luck comes their way when they inherit a small house in Hobart. Problem is, though, they don’t know or have even heard of Clara Bellinger, the testator, and Sophie is afraid it’s all been a mistake.
As Mia settles well into her new school and life in general, Sophie is not only occupied by her search of what connected her to Clara, but also her new studies and the two men, who suddenly have become part of her daily life - Mark O’Connor, the lawyer representing Clara’s estate, and Zach, the hunk from across the road.


Sophie stared at the attorney, waiting for some answers. She and her sister, Mia, had been quietly sitting in Mr. O’Connor’s office for more than half an hour, and had learnt about the details of their inheritance.

Startled by the subtle sound of the clock chiming across the road, Sophie’s gaze turned to the window, where she saw the post office building across the road. It looked impressive and old. Surely, an old place like this would have its own ghosts — after all, Hobart was renowned for its lively spirits.

Her younger sister’s gentle touch on her arm reminded her she hadn’t answered the question, yet. "I wouldn’t have a clue." Sophie shrugged and focused her attention back on Mr. O’Connor. Although hearing his words, she still found it hard to comprehend. Here she was in this old office, furnished with heavy antique oak furniture, the curtains in a pretty shade of aubergine, and the carpet beneath her shoes thick and warm in a matching shade.

"I believe she was a distant relative of yours. I’m afraid I don’t have any further details," he replied.

Sophie arched an eyebrow in disbelief. Was he serious? What kind of lawyer was he? Sure, Tasmania was at the very end of Australia, but wouldn’t they have the same education? With a slight shrug of her shoulder, she asked, "Why not?"

He stared at her. "Pardon me?"

Sitting up straight, she repeated, "Why not? Why aren’t there any further details?"

He looked uneasy, but she didn’t care. She needed to know. Sophie had received a call from the lawyer a week earlier, and he’d told her about an

inheritance. He’d given her details on where to pick up tickets to Hobart. Some legality, he had said. She needed to come in and sign documents for the transfer of ownership.

"Ms. Bellinger was one of the partner’s clients. I was only given the details shortly after the client’s death."

Sophie drew in her lips. Her eyes darted over to the window as she took a few deep breaths, inwardly calming herself. Nothing had ever been easy in her life. "Why isn’t the partner here?"

He took a deep breath. "Retired."
As she pondered on that for a moment, she began to think about what life could be like with this inheritance. Different. Better. Another sigh escaped as she returned her gaze to the man behind the desk. "You can’t just leave your assets to just anybody, can you?"

"Levesque," she helped him.

"Are you refusing the bequest?" he asked hesitantly, and she clearly noticed how one of his eyebrows arched upward.

Staring blankly with her mouth open, she could feel the panic running through her veins with every thump of her erratic heartbeat. An uncomfortable silence fell over them for a moment. Then she quickly said, "No. No, of course not. We’re accepting." She turned to look at her younger sister. "We’re actually looking forward to seeing it."

And with one swift movement, he stood and went to a little cupboard near the window and retrieved a bunch of keys. "Would you like me to take you there?"

Still feeling that rush within her, Sophie took Mia’s hand and inclined her head in answer. "Is it far?" Her voice sounded tired. Even to herself. It had been a long day already. She stood and thinking how tired she was, Sophie placed her arm around Mia, who was probably exhausted.

"No, not at all. Five to ten minute drive, I’d say."
"I still don’t understand. Why us?" Sophie asked quietly, meeting his gaze and, for the first time, actually taking in his icy-blue eyes. He was very attractive. Too attractive for a boring lawyer. His face was tanned by wind and sun, and there always seemed to be a hint of a smile on his face. His blond curling hair was cut short. Her gaze fixed back on his mouth. Blushing, she quickly looked away.

Sophie took her sister’s hand as she thought about his last comment. Distant relative? Her mother would have at least mentioned her once. She sighed and tried to understand, not the circumstances that had brought her there, but the fact that the attorney just didn’t know. "Oh well, let’s go then."

He pinched his nose with his thumb and index finger and took a deep breath. "Okay. Look, Miss Lever—"

Running his thumb over his eyebrow, he stepped closer, but not so close as to be intimidating. "I’m sorry. It’s been one extraordinary week," he said with his voice just above a whisper. "Once I get back I’ll check with the partners here to see whether anybody knows more about it."
One extraordinary week? His remark irked her. In fact it was downright annoying. Holding Mia even closer to her side, she lifted her finger and pointed at him. "No offence, Mr. O’Connor, but it has been quite a week for us as well, and I was prepared to answer all your questions. I have one simple question, and you don’t know. Wouldn’t there be something in the file?" Sophie was a kind person.


Kindness was her middle name, but she wouldn’t have got that far in life if she hadn’t watched some of those nasty actresses on television and copied them. And the stare. Sophie met his surprised frown dead-on.

He frowned and seemed taken aback by her words. "No offence taken." And then he let out a deep breath. "You’re right. I apologise. As I said, I’ll find out details and let you know."

"Thank you, Mr. O’Connor," she replied as she blew out a breath.

"What about our stuff?" Mia whispered to Sophie.

Sophie moved her head to look down at her sister, but before she had a chance to say anything, he beat her to it. "What stuff?" he asked as he opened the door.

"Considering what we inherited here, we brought all our things," Sophie explained without looking at him.

The attorney stopped in his tracks. "All, as in all your clothes?"

Sophie’s eyes met his. She emitted a small sigh, but tried to keep her composure. It was something she had learnt over the last few years. Standing straight, she corrected him. "All, as in all our belongings."

They stepped outside the building and followed Mr. O’Connor with their suitcases. Two teenage boys walked past them, eager to get the attention of some girls across the road. Aware of the attention, the girls covered their mouths with their hands and broke into giggles. Sophie’s stomach churned. So many things she had missed out on in life. But it was going to be better from now on, she reminded herself, and straightened up as she followed Mr. O’Connor.

One of the greatest things about tv in the 80s/90s/early 2000s were the 'Very Special Episodes'. We don't have them much now days bc, well... I don't know why. But I know I couldn't wait for the 'VSE' episodes to come on. Apparently, I love the drama. My favorite Home Improvement? Yeah, the one where Randy might have cancer. My favorite Saved by the Bell? "I'm so excited... I'm so excited.. I'm so... scared!" Yeah.

Do you have a favorite 'very special episode' of your favorite show? To help jog your memory, I found a video on youtube with some of the best of the best. Here ya go..
.

Go ahead and have 80s month on your blog too. Let's have some fun :)

ALSO, for all you Saint Sloan fans, I signed the contract earlier in the week for the sequel, SAVING SLOAN :) It is coming out in March/April 2014.


In Saving Sloan, Sloan DOES pick between Aaron and Ray :) Will it be the brother you like? Are you Team Aaron or Team Ray. Which brother do YOU think she'll pick? Leave a comment. I'd love to chat about it :)

~Kelly-- Be Excellent to Each Other.
Posted by Unknown at 7:32 PM 2 comments: