**A Note From Kelly** I am so excited or this new series from Katie M. John! I love paranormal (obviously) and I love the episode format. Like reading a TV show. LOVE. IT! ~Kelly 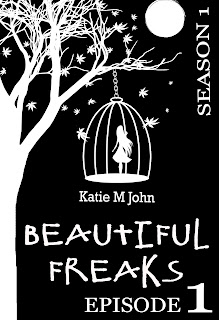 A dark and twisted saga that winds its way through the Victorian streets of London like a luxurious and lethal ribbon.

When a series of terrifying and seemingly paranormal murders occur at a rapid rate, panic and fear grip the city.

Still haunted by the ghost of the Whitechapel Ripper case, Inspector Steptree is forced to admit the murderer he now pursues maybe even more wicked and brutal. As the case closes down on the mysterious No.7 club, owned by the enigmatic Evangeline Valentine, Steptree discovers that evil is far from a fantasy. 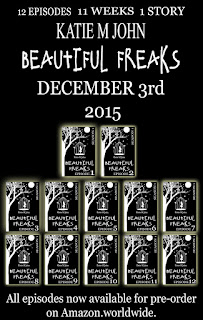 It is against this backdrop that Kaspian Blackthorne turns eighteen and begins his apprenticeship under the scientific maverick, Doctor Greyson, a pioneer in brain surgery, and human transplantation. Whilst Kaspian is introduced to the horrors and wonders of man’s scientific progress, he also begins an epic adventure of self-discovery and infatuation. Guided into the decadent and luxuriant world of the London West End night scene by his new friend Hugh Denvers, Kaspian tastes the sweet temptation of a life less ordinary, but such a privilege comes at a terrible price.

A cast of timeless characters and dark, grown-up fairy tales interweave to create a rich and haunting tale of fear and desire.

Based on the original novel, ‘Beautiful Freaks’ written and published in 2013 by Katie M John, this series is a development of that world. This is the first season of a planned three seasons. You can find out more about this season and forthcoming seasons on the official site. www.katiemjohn.com


GIVEAWAY
For your chance to win a very special Beautiful Freaks Hamper, to include a beautiful Freaks Mug, pen, signed paperback of the original novel, 'Beautiful Freaks' on which the series is based, then follow the Rafflecopter giveaway prompts below.
The giveaway is open to international, but please be aware for places outside of the UK and Europe then prize will be sent surface mail and may take 6-8 weeks to arrive (especially over Christmas period)

a Rafflecopter giveaway
Posted by Unknown at 8:02 AM