Today is the release day for the VERY LAST book in the Love in the 80s series: ONCE BITTEN, TWICE SHY (Who has the song earwormed in their brain now? You're welcome.) 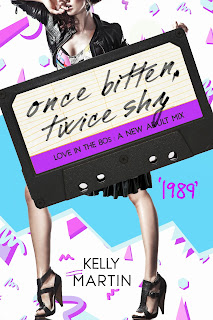 “What sort of name is Johnny Slade?” My dorm mate, Amy, is laying with her face buried in her pillow, crying so much I’m fairly sure the mascara stains will never wash out. Glad it’s hers and not mine. Last time this happened, I was pillowless for a week. Not my favorite time of life.

“Then again, I guess he didn’t have much say in what his name was.” It is as compassionate as I can get. I’m trying to study. Trying being the operative word. I love Amy. I do. We’ve been dorm mates since freshman year, and we’ve had our share of ups and downs. She can be a little needy, and I’m not the coddling type.

As much as I love living with her, sometimes I’d like to be alone. This is one of those times. I have a massive chem test tomorrow that I’d like not to fail. I know I shouldn’t be mad at Amy, though. It isn’t her fault the dude she dated Saturday night dined her, wooed her, sexed her, and left her.
For the past three days, she’s been stuck by the phone, waiting for it to ring, praying it is Johnny Slade, a man I’ve never met, but I’m fairly sure—according to Amy’s description—has horns.

I wish I could help her. I take that back, I wish she’d help herself by moving on with her life. Seeing as that’s not happening anytime soon, I consider spilling the beans about my little…side business.
It’s for girls just like Amy: girls who have been used, abused, mistreated, or downright screwed over by the men in their life.

Some people might argue that I’m taking advantage of these poor souls in their state of weakness. I say, if they want to pay me, who am I to be their moral compass? I have bills to pay, and the revenge industry pays a hell of a lot more than stripping. And, dare I say it, more fun.

Amy sits up, rivers of black cake on her red cheeks that would make Frank N Furter green with envy. She sniffs a few times and takes a deep breath, “Do you think he lost my number, Nancy?”
Oh my God.

If I had a dollar for every client who called Once Bitten asking the same thing… I wouldn’t need to go to college. I could retire on a beach with a drink and a cabana boy making my every dream come true.

I start to say this to Amy, but I can’t. She’s my friend and I don’t want to hurt her. Yes, I want her to move on; getting lectured from me isn’t the way to go. “I don’t know, Amy. Maybe?”

“You really think so?” Hope. I don’t like hope. Hope kills more than guns, in my opinion.

I smile and pray it doesn’t come off plastic. “It’s possible.”

Amy sits up on her knees straighter, a huge grin reaches from ear to ear.

I wait for it…

I think Bon Jovi sang it best with “Shot Through the Heart.”

It’s like a jolt of understanding hits her right in the guts all at once. Her smile contorts into a Ronald McDonald grimace and, with a sob I’m sure they hear two floors above us, Amy falls face first into her pillow.

I shouldn’t say what is running through my mind. It is tacky and impolite. Truthfully, it does no good now. The deed, as they say, is done. Can’t put the horse back in the barn—as my Grandma Molly said with a warning glare every time she decided to have the “sex” talk with me.

Amy beats me to it. “How could I be so stupid to lose my virginity to him?”

I throw her a tissue box ‘cause I’m nice like that.

“I don’t know, Amy. How could you be so stupid to lose your virginity to him?” Tactful? No. But damn, it is a question I’ve wanted answered since she strolled in here Sunday night with her hair teased and distressed more than normal, her tights ripped, and her shirt pulled way, way off the shoulder even for her. I don’t think he was easy on her.

Amy shakes her head in the pillow. “Dnwo loo lear bet wiered a feing a foudee-foudee…”

She lifts her head and glares at me with through squinty, tear filled eyes. “Don’t you ever get tired of being a goody-goody, Nancy? We’re seniors in college. Don’t you ever want to throw the virginity card out the window and have some fun once in a while?”

I don’t mean to laugh. I can’t stop myself. I’m a horrible person. “Yeah, ‘cause you look like you’ve been having fun the last three days.”

Honestly, if that’s what it feels like to get close to someone, to let them get close to me, then no. I’d rather stay where I am in life and do what I do to make ends meet, thank you very much. I get close. I take pictures. I turn to blackmail. I get paid for it. What is wrong with that?

“I go out.” I sigh, this chemistry test won’t study itself.

“You go to the library and study. That isn’t going out.”

If she only knew. Most of those “study” trips were dates with the exes of clients. Revenge is different for everyone. I aim to please.

Amy dries up her tears mighty quickly and looks at me like she pities me. Oh for the love of…
“I feel sorry for you. I really do.”

Funny how coherent she sounds now. “That a fact?”

“It is. You have no life. No prospects of a boyfriend, and yeah, maybe Johnny Slade did break my heart, but at least I put my heart out there. What have you done?”

Gotten paid to serve up revenge. “Nothing as worthwhile as you.” I grab my book and my bag. There is no way I’m getting any studying done here tonight.

“Where are you going?”

“Fine.” I head for the door when our phone rings.

She looks at me.

I look at her.

I know what she’s thinking. She’s wishing for Johnny Slade.

I know what I’m thinking… I hope it isn’t a client. So far I’ve been lucky. She’s never answered a call for me, but I know the time is coming. I need to be honest with her, but now isn’t that time.

She reaches for the phone. I throw my stuff down and dive for it.

It fumbles out of her hands and into mine. “Hello?” I say before she can grab it from my hand.

“Is it Johnny?” she whispers.

I motion for her to be quiet.

“Once Bitten?” the female voice on the other end of the line says.

Amy’s big, black stained eyes plead with me to tell me who it is. I’m pleading with her to let it go.
“Hi, Dad. It’s good to hear your voice.” I say, causing Amy to run from the room in an outburst of epic proportions.

“Excuse me?” The young woman on the other side of the line doesn’t seem to catch on very quickly.

“Never mind. Please talk quickly. How did you get this number?”

“Friend of a friend.”

Just like they all do. “What can I help you with?”

I nearly drop the phone. I know her! Holy cow! Dana Knox has been all over People Magazine and Teen Beat for the last six months or so for dating Senator Harris’ son: Beautiful Socialite Tames Wild Political Heir Romeo.  “Chad Harris needs to pay.” 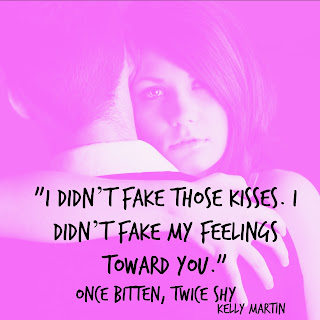 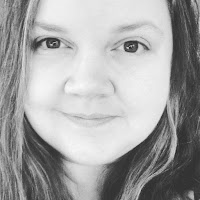 Kelly Martin loves paranormal books, villainous characters, and the dark... but she can't sleep without a nightlight. She has been married for over ten years and has three rowdy, angelic daughters. When Kelly's not writing, she loves taking picture of abandoned houses, watching horror gamers on YouTube-- even though she's a huge wimp-- and drinking decaf white chocolate mochas. She's a total fangirl, loves the 80s and 90s, and has a sad addiction to Netflix.